Please forgive the slight inconvenience in creating a new account. Due to juvenile delinquents spamming garbage to the site, we had to install a "Captcha", which can differentiate a spam bot from a human. Once you open your account, confirm it by returning the email, and identifying yourself, we will give you edit privileges. Just request them by leaving a message at click here. 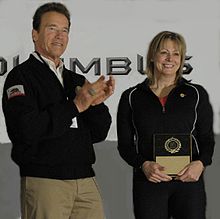 Karyn Marshall was inducted into the USA Weightlifting Hall of Fame in Columbus, Ohio in March 2011. Arnold Schwarzenegger (left) presented the award.

Dr. Karyn Marshall, DC, (born 1956 in Miami, Florida) is an American Olympic weightlifter of Norwegian descent who is notable for being world champion in 1987.[1][2] She set 60 American and world records in women's weightlifting and is the first woman in history to clean and jerk over 300 lb (136 kg).[5] She became a doctor of chiropractic and runs a private practice in Shrewsbury, New Jersey[6] while battling breast cancer since 2011.[7] In 2011, Marshall was inducted into the USA Weightlifting Hall of Fame.[2]

Marshall was born in a Miami hospital but grew up in Coral Gables, Florida, but the family moved north to Yonkers, New York in the 1960s.[6] She attended Bronxville High School and excelled in field hockey (she was goalie) and basketball (center), graduating in 1974.[6] She earned a bachelor of science degree from Columbia University in 1980[6][8] and was a Dean's List student.[1] She worked as a nurse for six months but changed her mind saying there "were a lot of frustrations."[1] She worked as a financial analyst at the Wall Street brokerage firm of P. R. Herzig and Company for ten years.[1][6]

Marshall began training in 1978.[8] She was coached by talented weightlifters such as Arthur Drechsler.[9] Marshall's first competition was the qualifying meet for the 1979 Empire State Games in White Plains, New York.[6] She won her first national championship in 1981.[8] During the 1980s, Marshall won her weight class six times out of seven and set 45 national records. In 1984, she made it into the Guinness Sports Record Book with a 289-pound (131 kg) clean and jerk, an Olympic event featuring a two-stage lift of a barbell above one's head. This lift topped the former record held by Sandwina.[6] In 1984, she was recognized as the world record holder for women's weightlifting in the 82.5 kg category, based on her results from a competition in Florida.[10] In 1985, Marshall lifted 303 pounds (137 kg) in the clean-and-jerk lift.[11] In 1986 at the inaugural women's world championships in Daytona Beach, she won three gold medals.[6] By 1987, a year described as being the first year in which there was an official recorded world championship for women,[12] Marshall won the International Weightlifting Federation (IWF) World Championship.[13] She was described as the "top American finisher" in the 181¾ pound weight class.[14] In 1988, she was listed in the New York Times roster of champions for women's weightlifting in the 82.5 kg category.[15] In 1989, she won the women's heavyweight division by lifting a total of 507 pounds (230 kg).[16]

Marshall won silver medals in international competitions—Jakarta (1988), Manchester (1989) and Sarajevo (1990).[17] In 1989, Marshall won the women's heavyweight division lifting a total of 507 pounds (230 kg).[3] In 1999, Marshall won a gold medal in the open division middle heavyweight division (+75 kg or +165¼ pounds).[4] She is an eight‑time United States Weightlifting Federation (USWF) champion and New York State record holder for the United States Powerlifting Federation (USPF). She is the first woman in history to snatch over 200 pounds.[18] A snatch is the other Olympic event in which a barbell is raised from a platform to locked arms overhead in a smooth continuous movement, pulled as high as possible, typically to mid chest height. Marshall holds the IWF World Record for the snatch lift at 248 lb (112 kg).[8]

The most exciting moment...was being the last American to lift at the 1987 Women's World Championship. The Chinese had dominated the competition, winning each of the other weight classes, and I was the last American hope. Lifting the most weight of the competition and winning three gold medals for myself, my team and my country was a most intense feeling.
—Karyn Marshall, 1989[8][19]

Marshall began studying to be a doctor of chiropractic at the New York Chiropractic College based on her successful experiences as a patient.[6][21] She attributed much of her success in weightlifting to chiropractic because it steered her away from painkillers and towards drug-free and non-surgical forms of treatment and prevention, she said in an interview.[21] She explained her decision to become a chiropractor allowed her to "stay involved in health and fitness, while at the same time being able to use my knowledge and experience to help other people."[21]

After competing in several weightlifting events at the CrossFit Games in summer 2011, Marshall took a 15–minute ice-bath to speed recovery time, reduce soreness and inflammation. In the past, she had combined ice baths with saunas. She described the ice bath experience:

The hardest part was the first two minutes. Others who do it often told me to 'just hang in for two minutes' then it would be easier. After two minutes I was numb. Afterwards I was shivering for about two hours in the hot California sun with a warm up jacket on.
—Karyn Marshall, CrossFit Games, 2011